The following letter was written by Calvince Otieno, who was sponsored by Rafiki Africa starting in the second grade. He wrote a letter of thanks to Rafiki Africa for the organization’s involvement in his and his family’s life. We edited the writing lightly, for comprehension.

My name is Calvince Otieno, one of the Rafiki beneficiaries. I come from a very humble family in Alendu, Kenya. I was born and raised in a family of six siblings. Four of my siblings died at tender ages due to malnutrition and easily preventable and curable diseases. My parents could not take them to the hospital due to inadequate funds and knowledge of their curable condition. I also lost my mother when I was only 8 years old. We were left in the hands of my dad, who was also affected psychologically by the sudden death of my mother.

The situation became unbearable for us, and we did not only lack the basic needs, but also the funds to pay for our education. This forced my only sister to drop out of school and get married at a very tender age.

Thanks to Rafiki, which came to our rescue. There are really no words to express my gratitude for all you have done for me.

Rafiki is like a candle that lightens the lives of others and brightens the future of those who have seen their future as the most black.

You shaped my mind and future and have made a huge difference in my life. You have gone above the call of duty for me. Thank you for your patience, thank you for giving me courage and making me a better person.

I am through with my diploma in nursing and, through God’s grace, I want to do more so that I can support and help Rafiki to touch and change the lives of many others, just as I was touched and changed.

My desire is to further my education and make it the world standard to have better opportunities to touch and change the lives of others. I went to India: it was a great experience and good exposure. I pray to achieve more and am certain Rafiki will help me realize my dream once again. Rafiki ni rafiki kweli. (Rafiki is truly a friend).

The Blessing of One Faithful Family Sponsor

Meshack lost his wife during child birth and was left to care for six children.

He had to send the newborn baby and Meldin, his seven year-old daughter, to live with a relative, because he could not afford to take care of them. For over two years, Meshack and his remaining children lived in a very small and unsafe home. [Read more of their backstory here.] 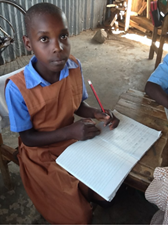 Meldin on her first day of second grade at LHA

Rafiki Africa Foundation came to know about the family’s situation during a home visitation by our social workers.

The two teenage girls attended LightHouse Academy (LHA) and lived a very difficult life. They could not focus on their education because they had taken over

their mother’s responsibilities of providing for the family. Rafiki started working with this family to provide basic needs for the home. LHA offered Meshack a part-time position.

In addition, with the help of a generous U.S. sponsor, Meshack was able to reunite his family. Now they live in a safer home together. He can provide three meals a day, health care and other needs for his family. All the children are happily reunited and attending school at LHA.

Meshack is a single father of five living in Alendu.

He once worked in the city of Kisumu as a tuk-tuk driver, a three wheeled taxi, and his wife owned a produce business. Today he is dressed professionally, and you might think he just left a meeting at Prince Street Cafe. That drastically changed in July of 2007, when his wife had a obstetrical hemorrhage while birthing their youngest daughter. Despite receiving care during delivery at a government hospital, she bled to death in Kisumu. Your own mother will probably tell you that hemorrhage is both common and easily treatable in the United States.

Meshack’s eldest children, Esther and Nelly are fourth and second grade students at LightHouse Academy. Sleeping under a mosquito net, the two girls and their brother share a bed in a one-room mud hut with their father. Unable to care for his infant after the loss of his wife, Meshack’s sister-in-law has taken care of the two youngest children. At age 7, Meshack’s fourth daughter had been charged with watching her baby sister  instead of attending school. Meshack was building a second mud hut for all of children to live in, but ran out of money during construction. He has been praying to God for a means to provide for his family. Rafiki has been working with a donor to complete the project, adding a rainwater collection system and solar panels for lighting. Meshack’s story is by no means uncommon; there is much work for Rafiki.